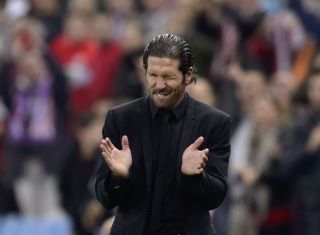 Simeone's side needed spot kicks from Diego Costa and David Villa before a late sending off of Atletico's Filipe Luis and a goal to Granada's Odion Ighalo made for a nervy finish in their 2-1 victory.

Granada dominated on the ball, holding 68 per cent of the possession, but Simeone was impressed his players' resilience in obtaining the three points.

"I am left with the impression that team gave me, which is that they know how to struggle when they have to and still manage to win, because we are going to have to struggle to stay in the position we are just now," Simeone said.

"Penalties are part of the game and winning away from home is difficult."

Atletico are now one point behind La Liga leaders Barcelona after 11 games but Simeone maintained that he would keep the players focused week-to-week.

"I am very happy for the effort the players have shown, it is not easy to keep winning, but we are not thinking further than the match against Athletic Bilbao on Sunday," he said.