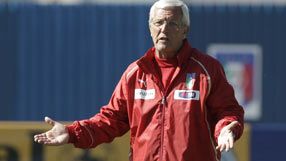 "It doesn't make any sense as we already have a coach for the national team," said Ukraine football chief Hrigory Surkis, referring to Yuri Kalitvintsev who was appointed in a caretaker role in August.

"All these media stories have no basis whatsoever," Surkis told local media. "Most likely Kalitvintsev will continue as coach after the winter break.

"He just needs to back up his claims for the job with some positive results."

Italy's Gazzetta dello Sport reported on Sunday that Lippi was ready to return to coaching and might attend Ukraine's friendly against Switzerland on Wednesday.

The 62-year-old has been out of work since Italy were dumped out of this year's World Cup in the group stage.

Ukraine are preparing for Euro 2012 which they are jointly hosting with Poland.