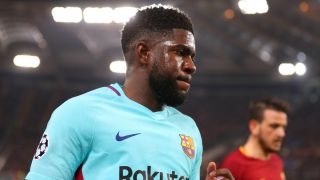 Barcelona defender Samuel Umtiti has confirmed that he wants to sign a new deal with the LaLiga champions.

The France international is in discussions with the club about extending his contract at Camp Nou, amid rumours Manchester United are interested in signing him.

Umtiti has a relatively low release clause of €60million, with Barca understood to be eager to increase the figure – and the 24-year-old has made it clear where he sees his future.

Speaking to L'Equipe, he said: "It is clear that I want to renew with Barcelona and I hope to be on the team next season.

"I'm at a club that allowed me to realise my dream of playing there. I'm still under contract at the moment so for me to leave, either they throw me out the door or I decide to leave."

Speaking last week, Barca's president Josep Maria Bartomeu revealed that the club are attempting to strike a balance with Umtiti's wage demands and their salary structure.

"Umtiti has a contract. We are talking with him to renew it," he told radio station RAC1.

"We try to maintain a salary structure that has a certain harmony.

"We will try to reach an agreement because he has had a good season. The important thing is that we work in peace."