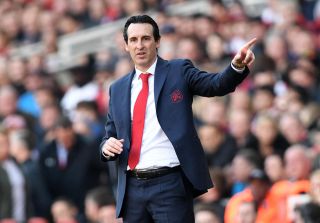 Arsenal head coach Unai Emery insists winning the Europa League is more than just qualifying for the Champions League as he targets a trophy during his first season in charge.

The Gunners became the sixth and final Premier League club to qualify for the quarter-finals of this season’s continental competitions as they overturned a 3-1 first-leg deficit to beat Rennes on Thursday night.

A Pierre-Emerick Aubameyang brace and just a second Arsenal goal for Ainsley Maitland-Niles secured a 3-0 victory which sent Emery’s side through 4-3 on aggregate.

An all-English quarter-final against Chelsea is a possibility while Emery’s former club Valencia remain an option – as do Napoli, Villarreal, Slavia Prague, Benfica and Eintracht Frankfurt.

While success in the Europa League is seen by many as, first and foremost, a route back into the premier European club competition, Emery – who won the trophy three years in a row at Sevilla – knows it offers much more than that.

“In the domestic league, like here, we have six teams playing to be in the top four. Two teams are going out and the Europa League is giving us a big opportunity also to take one way to go to the Champions League.

“It’s also because it’s one title and I think we can feel the possibility to win one title, doing this way with a difficult moment like today and playing also against big teams.

Aubameyang celebrated his second goal, the third on the night, by donning a mask of Marvel superhero Black Panther.

In the past the striker has worn Batman and Spiderman masks to toast goals – but he explained why this time was a special moment.

“I needed a mask which represents me,” he told BT Sport.

Rennes had made the most of facing 10 men for 50 minutes of the first leg following the dismissal of Sokratis Papastathopoulos – turning a 1-0 deficit into a 3-1 win.

While Sokratis was forced to sit out the second leg, Arsenal were able to call on Alexandre Lacazette after his three-match ban for a red card in the previous round was reduced to two games on appeal and, having already served both of those games, so took his place in the side.

Great comeback from the team! 🙌🏼😎 Difficult week for us, but we showed good character and determination to reach the #UEL quarters! 👍🏼😉 #WeAreTheArsenal#YaGunnersYa#M1Öpic.twitter.com/wdea1a3JkH— Mesut Özil (@MesutOzil1088) March 14, 2019

Rennes boss Julien Stephan questioned that decision – as well as another possible sending off for Lacazette in north London and Aubameyang being offside for the crucial second Arsenal goal.

“On the offside, it was very clearly an injustice, it was an error,” he said.

“That goal changed a lot of things. Regarding the Lacazette decision, the commission decided that his elbow against BATE was only worth a two-game ban.

“There was a tackle by Lacazette in the first half which was borderline, for which he got a yellow.

“Then he made a challenge on (Ramy) Bensebaini which was also borderline, but the decision didn’t go our way.

“There were quite a few things that went against us over the past couple of days. It’s a learning curve for a club of our level, we don’t have the power of Arsenal.”