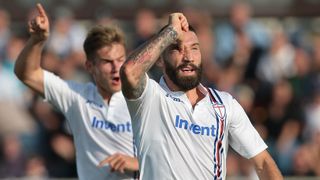 Uncapped defensive duo Lorenzo Tonelli and Cristiano Piccini have been called up to the Italy squad after Danilo D'Ambrosio, Alessio Romagnoli and Patrick Cutrone all withdrew.

Tonelli has impressed on loan at Sampdoria this season from Napoli and scored the winner against Atalanta on Sunday, while Piccini has settled well at Valencia after joining from Sporting CP in July.

Nice striker Mario Balotelli and Torino's Andrea Belotti have been omitted from Roberto Mancini's squad for Wednesday's friendly against Ukraine and a Nations League clash with Poland four days later after enduring difficult starts to the season.

The former Manchester City manager, however, insists the door has not been shut on the pair and says they will be in contention once again when they return to form.

, and have all had to leave the camp. Lorenzo () and Cristiano () have been called up as replacements. October 8, 2018

"Balotelli and Belotti are not going through an extraordinary period," Mancini told reporters.

"When they are at 100 per cent they will come back to the national team.

"And, in any case, they are not the only ones excluded."