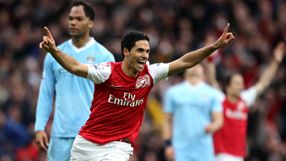 A 15th-minute penalty from Wayne Rooney and a long-range Paul Scholes strike in the second half secured the points for United against relegation-threatened QPR who had Shaun Derry controversially sent off at Old Trafford.

A bleak day for City ended with the volatile Mario Balotelli being dismissed in the dying minutes for a second yellow card after a nasty challenge on Bacary Sagna.

Manager Roberto Mancini said his fellow Italian now faced a lengthy ban and in any case he would not pick him again this season.

Although neither Mancini nor United manager Sir Alex Ferguson would declare the title race over, the leaders would have to collapse dramatically in the remaining six games to avoid becoming champions for the 20th time.

United's victory over QPR was their eighth in succession in the league. Ferguson's team have 79 points from 32 games while City, who have won just once in the last five matches, are on 71.

Mancini looked like he was at the end of his tether with striker Balotelli after City's defeat while also refusing to concede the title race was over.

"Until you can't mathematically win it you are always in the race but it is going to be difficult after today," Mancini told reporters. "It's clear we need to start winning again but I am the right man to bring the title to City, 100 percent.

"I have finished my work with him [Balotelli], I am finished today, but I love him as a guy... he is not a bad guy and he is a fantastic player but at this moment I am very sorry for him as he is continuing to lose his talent and his quality.

"I hope he understands he is in a bad way for his future and he must change his behaviour. He will not play again [this season] and I will probably try to sell him in the summer," added Mancini.

Neither City nor Arsenal played particularly well in the rain at the Emirates but the home team improved as the match progressed and hit the woodwork three times before Arteta's goal.

Arsenal are now two points clear of fourth-placed Tottenham Hotspur in the race for an automatic Champions League berth.

Balotelli was lucky to stay on the field after a rash 20th-minute studs-up challenge on Alex Song. He was then booked for a bad tackle on Sagna before being sent off late in the game.

While problems have dogged City's title challenge recently, United seem to be sailing serenely on.

Although they got a helping hand with Derry's 14th-minute sending-off, they were vastly superior to QPR.

"It was a good win and three points and we now have a better goal difference than City so it's been a good day," said Ferguson.

QPR manager Mark Hughes, the former United striker, said his club would appeal against the dismissal which occurred when winger Ashley Young, who appeared to be offside, seemed to div