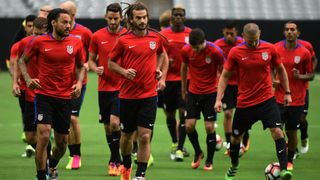 It is not something the United States had hoped for but a third-place play-off against Colombia provides the chance to end the Copa America Centenario on a high.

After unsuccessful semi-final ties at the tournament, staged outside of South America for the first time, host nation USA and Colombia will face-off in Phoenix on Saturday.

USA's quest for a maiden Copa America final came to an abrupt end at the hands of last year's runners-up Argentina, who eased to a 4-0 victory in Houston, while Colombia lost out to defending champions Chile 2-0.

While the result was disappointing for USA, coach Jurgen Klinsmann and Co. have quickly turned their attention to a rematch with Colombia as they seek redemption for their opening-game defeat to the South American giants.

"It is time to regroup now to give it a go in a very special third-place game," Klinsmann said in a Q&A session via his official Facebook page. "It is a huge opportunity to again for us.

"We met them in the first game and we lost 2-0. We only conceded from a corner kick and a penalty.

"We learned from that. Now we are ready to give them a real go. So this is big, for our players to measure ourselves."

After losing 2-0 to Colombia, USA went on to beat Costa Rica and Paraguay as they topped Group A, before edging Ecuador in the quarter-finals.

USA came unstuck against Argentina but the CONCACAF powerhouse now have the opportunity to record their best Copa America performance, having lost a third-place play-off in 1995, coincidently against Colombia, with Jermaine Jones, Bobby Wood and Alejandro Bedoya set to return.

"We are going to field our best team," the German added. "We have the chance to finish third in the Copa America, so it's huge."

Colombia will be hoping for more favourable conditions at the University of Phoenix Stadium.

A severe storm halted play for over two hours in Chicago, with both sets of players stuck in the dressing rooms at half-time, however the damage was done long before then as Charles Aranguiz and Jose Fuenzalida gave Chile a 2-0 lead inside 11 minutes.

"The key is to always try, learn from the experiences that football gives you to be better every day," captain James Rodriguez wrote via Instagram as Colombia touched down in Phoenix. "Now we must finish the best way possible."