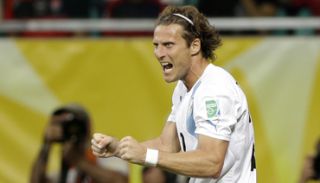 Describing the 34-year-old as "a great professional and a top striker," Tabarez said Forlan's abilities were on full display in a victory that left Uruguay hot favourites to join Spain in the semi-finals.

"The way he can use both feet, his ball control, he showcased his talents today," the coach added. "He won his 100th cap tonight and that is very important for him and it is a tribute to him that he has made it this far."

Tabarez's side struggled for spells in a lacklustre match in which he took the rare step of fielding all three of his top class strikers in Forlan, Luis Suarez and Edinson Cavani.

The three points were won more because of guts and good fortune than moments of brilliance, said Tabarez.

"It wasn't show football, we had to work hard," he said. "Circumstances, good luck and other imponderables were on our side and we are satisfied with what we have done."

Nigerian coach Stephen Keshi blamed a lack of concentration for the loss and said his side had otherwise matched their vastly more experienced rivals.

Nigeria now need to beat Spain on Sunday and hope Uruguay slip up against Tahiti, who conceded 10 goals to the world and European champions earlier on Thursday.

While Spain are on a 23-game unbeaten streak, Keshi refused to give up hope.

"Of course we do have a chance, until the end of the 90 minutes you can't tell what is going to happen," he said.