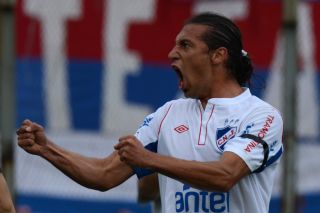 Juan Manuel Diaz, Ivan Alonso and Richard Porta all scored for Nacional as they took control of their match away to Juventud de las Piedras and while the home side struck back with 10 minutes remaining, the visitors held on for the three points.

The win on Saturday took Nacional to 21 points after eight rounds in Uruguay's top tier, while Danubio, who had claimed top spot earlier in the round with a 3-1 triumph away to Defensor Sporting, slipped back to second on 20 points.

It took just three minutes for Nacional to break open Juventud's defence at the Estadio Centenario with Diaz converting but the league leaders had to wait until the second half to double their lead with Alonso striking in the 53rd minute.

Porta made it 3-0 in the 71st minute before Alejandro Reyes pulled a goal back for Juventud, although it meant little to the final result.

At Defensor's Estadio Luis Franzini on Friday, a brace from Liber Quinones either side of a goal from Ignacio Gonzalez led Danubio to victory.

River Plate came from behind to draw 1-1 away to Wanderers to stay within two points of Danubio in third on the Primera Division table, while fourth-placed El Tanque Sisley thumped Rentistas 4-0 and Liverpool, who are fifth, overcame Cerro Largo 3-1.