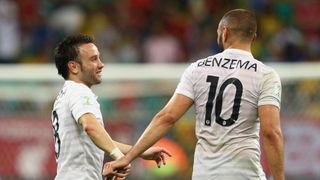 Mathieu Valbuena said "justice will restore the truth" after Karim Benzema accused him of inventing stories amid the blackmail scandal involving the duo.

Neither player has represented France since Real Madrid forward Benzema was charged in connection with an alleged attempt to blackmail Valbuena over a sex tape.

In an interview with French newspaper L'Equipe, Benzema claimed Lyon midfielder Valbuena was lying about his role in the affair.

"There's really something wrong with him. It's all part of his story," Benzema said. "When I hear him say that he's ready to play with me again. To hear him at the beginning, I'm scum, I threatened him, I scared him, all you can invent… And now he wants to play with me!

"He must stop his c**p, and I do not know why he keeps talking about me already. I am his enemy, I wanted to take money from him? He really has to stop inventing, it makes me mad to keep on lying. Sex tape? He just had to tell the truth about what really happened, and he would not have had all of this."

While he did not directly address Benzema's remarks, Valbuena posted a message on social media expressing his belief that the law will side with him, when the case goes to trial.

"Slander is the weapon of the impotent, it is distressing !!!" Valbuena wrote on Twitter. "Justice will restore the truth."

Valbuena and Benzema were both left out of France's squad for Euro 2016 on home soil, but French Football Federation president Noel Le Graet indicated in February that the decision over a possible recall rested with coach Didier Deschamps.