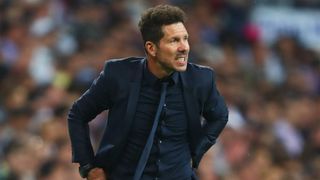 Atletico Madrid were unable to celebrate Diego Simeone's contract extension with three points as Valencia held them to a 0-0 draw at Mestalla.

Long-serving head coach Simeone penned terms until 2020 with Atleti this week – a year on from negotiating a reduction in a deal that was also due to run into the next decade.

His side had the upper hand for sustained spells against a committed and energetic Valencia but lacked the sharpness they showed in the 5-1 thrashing of Las Palmas before the international break.

Valencia faded as an attacking force after half-time, when their threat was generally restricted to set plays, but boss Marcelino can reflect with satisfaction upon a return of five points from a tricky opening to the campaign, having watching his team battle to a 2-2 draw with Real Madrid last time out.

Like both their city rivals and weekend opponents, Atleti have won one and drawn two of their initial fixtures, granting Barcelona an opportunity to claim a healthy early season advantage with victory in the Catalan derby against Espanyol later on Saturday.

Angel Correa, retained in attack for Atletico as Antoine Griezmann concluded his two-game suspension, rampaged towards the Valencia penalty area in the fifth minute and his eventual shot took a deflection off the scampering Ezequiel Garay – making Neto's save low down to his left all the more impressive.

Valencia midfielder Geoffrey Kondogbia played in debutant Andreas Pereira to send Juanfran twisting and turning but the on-loan Manchester United youngster blasted over from the edge of the box having fashioned space.

Kondogbia was impressive as Valencia took control in the middle period of the half but Correa and Thomas Partey seized upon some sloppy work in possession from the former Sevilla man to feed Luciano Vietto, who turned and shot sharply over the crossbar.

Rodrigo Moreno could not keep his header from Jose Gaya's cross down and the deadlock remained intact at half-time as Vietto nodded past the post.

Neto got behind Yannick Carrasco's well-struck effort two minutes after the restart before another of Atletico's Argentinians, Correa, botched an opening on the counter-attack with an over-hit pass.

Valencia's Arsenal loanee Gabriel found space off the back of Filipe Luis in the 58th minute but failed to direct his header goalwards.

Simeone introduced Nico Gaitan after an hour to end a frustrating outing for Correa and Neto unconvincingly shovelled a low attempt by the former Benfica man behind after the hour.

In the final 20 minutes, Kevin Gameiro joined fellow substitute Fernando Torres in attack for Atleti but a more conventional front two endured similar frustration as once absorbing contest petered out.