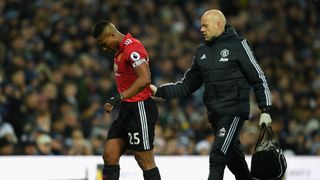 Saturday's trip to Leicester City is the first of four games for United in the space of 10 days, with Burnley and Southampton visiting Old Trafford just after Christmas, and short the journey to Everton to come on New Year's Day.

Carrick looks set to miss all of those matches as he remains unfit after recovering from a heart problem, while Valencia (hamstring) and Fellaini (knee) will at least be out of the Leicester game, with Eric Bailly already ruled out.

"Valencia is out, as you know. Eric Bailly is having surgery right now, or is just finishing," said Mourinho.

Jose Mourinho has confirmed that Eric Bailly, Marouane Fellaini and Antonio Valencia will all miss the match against Leicester City. December 22, 2017

"Fellaini is not available. I don't know [if he will feature over Christmas]. Michael Carrick, no, not for the Christmas period."

The match at the King Power Stadium will be United's first outing since getting knocked out of the EFL Cup by Championship side Bristol City on Wednesday.

And despite that shock defeat, Mourinho insists that it has not helped him make any decisions regarding selling certain players, before going on to downplay the loss in Bristol.

"No, I don't make decisions based on one game, one feeling or one night," he said.

"First of all, you always like to speak about the loser [after matches], but maybe we should speak more about the winner.

"Like I said after the match, they [Bristol] were lucky, but they fought a lot and it was one of things that's beautiful in football, when a team from a lower division kills a giant.

"I could be critical of my players, I could, but I thought they did enough to win. They lost when trying to win; they lost when they were the only team people thought could win. We must move on quickly."