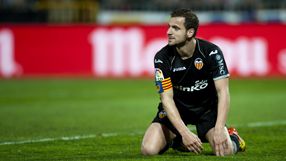 Fourth-placed Malaga failed to take full advantage of Valencia's setback when they surrendered the lead in the later kick-off and drew 1-1 at home to Real Sociedad, who had Mikel Gonzalez sent off shortly before half-time.

With five matches remaining, Valencia, who play their Europa League semi-final first leg at La Liga rivals Atletico Madrid on Thursday, have 52 points, with Malaga on 51 and fifth-placed Levante, 2-1 losers at home to Barcelona on Saturday, on 48.

In a congested middle section of the table, where only eight points separate Levante from Rayo Vallecano in 14th, Espanyol, Athletic Bilbao, Sevilla and Atletico Madrid all have 45 points.

Atletico are 10th after their 1-0 win at Rayo Vallecano in the late kick-off, Espanyol are ninth and Bilbao, who won 1-0 at home to Real Mallorca, are eighth.

Sevilla, in seventh, can draw level with Levante on 48 points with a win at Getafe on Monday that would also take them above Osasuna. The Pamplona-based club stay sixth on 46 points after they lost 1-0 at Real Betis.

Valencia looked a shadow of the side who have blazed a trail into the semi-finals of Europe's second-tier club competition.

They fell behind in the 26th minute at a sun-bathed and festive Cornella-El Prat stadium when Cristian Gomez powered a Sergio Garcia centre into the net from close range.

Joan Verdu doubled the lead four minutes later with a superb strike from just outside the penalty area that arrowed into the top corner, Alvaro Vazquez added a 58th-minute third after a mix-up in the visitors' defence and Kalu Uche rolled in a fourth around 10 minutes from time.

"We played a poor match and they deserved to win," Valencia coach Unai Emery told a news conference.

"The match was evenly balanced in the opening stages but after their first goal everything went in the opponent's favour and we were a notch below Espanyol," he added.

"Now we need to pick ourselves up and focus on our remaining league games."

At the Rosaleda, ambitious Qatar-owned Malaga were ahead in the 19th minute thanks to Isco's deflected shot before defender Gonzalez earned a second yellow card shortly before halftime.

Xabi Prieto equalised four minutes into the second half and Malaga were unable to breach the visitors' defence again despite numerous chances and the introduction of former Real Madrid and Manchester United striker Ruud van Nistelrooy.

The players were furious when the officials ruled out a Martin Demichelis strike for offside in the dying moments and television replays suggested their complaints were justified.

"They disallowed a legitimate goal and that decided the match," Malaga coach Manuel Pellegrini said at a news conference.