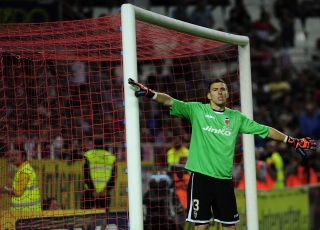 The Premier League side have been linked with a move for the 26-year-old keeper, but their initial interest was apparently rejected by the La Liga side.

Guaita made 25 appearances in all competitions last season - two less than rival stopper Diego Alves - but was not selected for Valencia's opening day win against Malaga last Sunday.

Club president Amadeo Salva admitted the player was unhappy at being second choice at Mestalla, but insisted he would only consider a bid that met their valuation.

"Guaita is a world-class keeper and we have no need to sell, but we would study the price of any offers,’ Salva told Las Provincas.

"He is not happy with being a substitute sometimes, and his agents have reported that he could find a way out.

"This does not sit well with the board - if you do not play every week, you have to make sure you keep respecting Valencia."

Guaita is reported to have a €25 million release clause in his contract at Valencia.