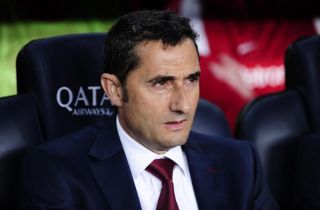 A 3-1 win at home to Sevilla on Sunday saw Bilbao move six points clear of the fifth-placed side with three La Liga matches remaining.

Valverde talked up the importance of the win at San Mames, but said it was a long way from being a job done for his side.

"The importance of this victory against Sevilla is huge, but we're not done," he said.

"We're at the gates and now we have three chances to enter and I hope we can on Friday (at Rayo Vallecano).

"Three points remain to get into the Champions League. It's a dream for us all."

Valverde said the opening goal was crucial for his team, who he felt were largely untroubled by Sevilla.

"The opening goal from Susaeta brought us a certain level of calm," he said.

"Sevilla came here with the aim of being strong in the middle and defensively. Overall though, we haven't suffered much from their counter-attacks."