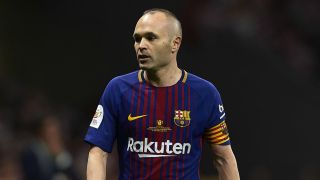 Barcelona boss Ernesto Valverde remains hopeful that Andres Iniesta will be fit enough to feature in his last Clasico on Sunday.

The 33-year-old trained away from the rest of the first-team squad on Thursday, but completed part of Friday's session and is expected to complete the entire programme on Saturday.

The match will be the Spain star's last for Barca against Real Madrid, with the midfielder having confirmed last month that he will leave the club at the end of the season, and Valverde will let him decide if he is fit enough to play.

"We hope he's fit," he said at his pre-match press conference.

"After training today I'll speak to him and see how he's feeling – that's the most important thing.

"If he's feeling good – and I trust his opinion – then he will play.

The first team have been training again - the penultimate session before  May 4, 2018

Iniesta has been tipped to move to the Chinese Super League and is rumoured to have been offered a sizeable contract from Chongqing Dangdai Lifan.

According to El Mundo, Iniesta would earn €81million after tax on a three-year deal with the CSL club, who would also buy six million bottles of wine from his family business based in Fuentealbilla.

Valverde revealed that he first knew about Iniesta's decision to leave Barca around six weeks ago, but never had any intention of trying to change his mind.

"He told me about a month to a month-and-a-half ago," he added. "When it's someone who has been in football for so long, you don't need to convince them to stay.

"He is old enough to make his own decision. He'd been thinking about it for a long time, looking at what he's got ahead and what he's leaving behind.

"It wasn't me trying to influence him to stay – it was a question of trying to understand everything he was saying to me."