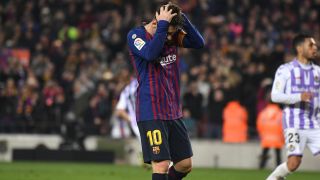 Barcelona head coach Ernesto Valverde is not worried about Lionel Messi taking penalties after the superstar scored one and failed to convert another against Real Valladolid.

It was a mixed evening for Messi at Camp Nou, where the Barca captain's 43rd-minute penalty led the LaLiga leaders to a 1-0 victory on Saturday.

Messi – who has scored 30 or more goals in each of his last 11 seasons in all competitions for Barca – should have had a second but the five-time Ballon d'Or winner saw his 85th-minute spot-kick kept out by Jordi Masip.

"No, no, I'm not particularly nervous. I was convinced he was going to score both," Valverde replied when asked if he was anxious about Messi taking penalties.

"Leo is a safe bet. He could have scored more goals as well."

Barca were far from their best but the defending champions still managed to get past visitors Valladolid as they returned to winning ways.

Three consecutive draws against Valencia and Athletic Bilbao in LaLiga, and Real Madrid in the Copa del Rey semi-finals, raised eyebrows and while Valverde acknowledged Barca's shortcomings on Saturday, he is confident his side will rediscover their best.

Barca travel to French side Lyon for the opening leg of their Champions League last-16 tie on Tuesday.

30 - Lionel Messi has scored 30+ goals in each of his last 11 seasons for @FCBarcelona in all competitions. Extraterrestrial. pic.twitter.com/abyokCMS2V— OptaJose (@OptaJose) February 16, 2019

"In the first half, we had very little fluidity in attack and did not move the ball with the necessary speed," Valverde told reporters.

"They changed their system and we were not fluent and could not circulate things quickly but their goalkeeper did well. Some games are won like that, though, and Tuesday [against Lyon] will be another challenge for us.

"I see the team as being ready to give their best now and get back to that. Sometimes you won't be brilliant in every game but there are four important matches coming up and we will go step by step."