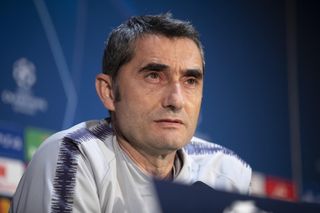 Ernesto Valverde admits he does not know how long Barcelona will be without Lionel Messi as the champions look to end their poor away form at Getafe this weekend.

Messi, Barca’s all-time record goalscorer, was withdrawn at half-time of Tuesday’s 2-1  win over Villarreal at the Nou Camp due to an adductor injury.

The Argentina forward had just returned to full fitness from a calf problem and was making his first start of the season for Barca, who have had a mixed start to the campaign with three wins from six matches.

“I don’t know how long he will be out,” Valverde told a press conference on Friday, reported by marca.com.

“I hope he will be back soon. He does not have a serious injury.

“We’ll have to wait to see how things go.”

The Catalan giants head to Getafe looking for their first away win in any competition since April.

So far this season they have picked up just one point from three games on their travels, which have been against Athletic Bilbao and promoted sides Osasuna and Granada.

When asked about Barca’s away performances, Valverde said: “I don’t think it affects us, but as the subject is talked about so much…it is best to win as soon as possible to remove that feeling, but what matters to us are the points.”

He added: “I think that tomorrow we have a good opportunity to get a good result away from home.”

Barca returned victorious from their last trip to the Coliseum Alfonso Perez back in January but the 2-1 win was far from comfortable.

Valverde expects another difficult game on Saturday, saying: “It will be a similar match to last season.

“Getafe are tough and disciplined. They are a team that does well in attack, with many players. We suffered a lot last season to win there. They always tend to give away few chances.”

Getafe currently sit 10th in LaLiga, with only one victory but only one loss so far this season.

Their fourth draw of the campaign came on Wednesday when they battled back from two goals down to hold Valencia 3-3 at the Mestalla.

Getafe may have had a day less to prepare than Barca for Saturday’s encounter but coach Jose Bordalas insists his side are ‘well’.

“The team is well, we’ve high hopes and have faith we can have a good game and cause our opponents problems,” said Bordalas, who expects a tough challenge against the champions, with or without having to face Messi.

“We all know he’s the best player in the world and he’s a big loss for Barca, for football and our league.

“(But) they are still a great team and they’ve shown that, they are capable of beating anyone. We know it’s going to be a difficult game.”