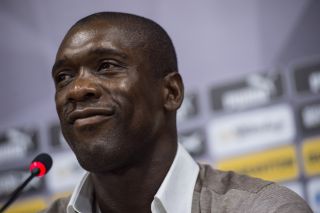 Seedorf played for the San Siro club between 2002 and 2012, and confirmed on Tuesday that he is retiring from playing to take over the reins from the sacked Massimiliano Allegri.

Milan sit 11th in Serie A after they gave up a two-goal lead to lose 4-3 at lowly Sassuolo on Sunday, and have won only five league games this season.

While compatriot Van Basten understands why the seven-time European champions chose the 37-year-old Seedorf, he remains unconvinced over whether the appointment will work out for both parties.

"They have opted for Seedorf, which makes sense in some way, but is also a big risk," Van Basten told NOS.

"You never know how he will cope with the situation and solve things. It's not the wisest thing to do in my opinion, but I'm not the one making the decision."

Van Basten's playing career was cut short at Milan due to injury, with the 49-year-old retiring from playing in 1995 before embarking on his managerial career, which began when he was named Netherlands coach in 2004.

And he feels his situation is completely different to that of Seedorf's because of his nine-year break from the game.

"He (Seedorf) is fluent in Italian and has enjoyed a long and successful career. Those are important things, too," Van Basten explained.

"The difference with my own situation is that he's going straight into coaching after hanging up his boots. I completely left the game after retiring and then had to make a comeback."