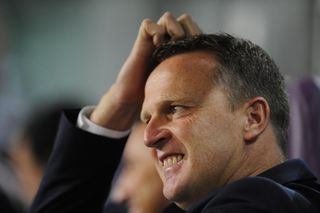 The Belgian champions struggled to contain an in-form Zlatan Ibrahimovic in the UEFA Champions League Group C match, and were punished as the Sweden striker scored four times.

Edinson Cavani also found the net as Anderlecht were beaten without scoring for the third successive game.

A downbeat Van den Brom said: "This defeat is hard. We have to forget and focus to the (league) match against Standard (Liege). 0-5 is a big defeat.

"No goals, no points after three matches. This is not so nice.

"We fought so hard last year to get the right to play in the Champions League. Note that we do not have the level - this is very disappointing for me but for the whole club. There is a lack of quality.

"I'm still proud of my players who continued to play football."

Despite the defeat Van den Brom was quick to pay tribute to Ibrahimovic and admitted PSG’s style of football had impressed him.

"I really enjoyed watching Paris play, as our supporters did. Ibrahimovic, he was exceptional," added the Anderlecht boss.

"He decided the fate of the match alone.

"(The first) two goals really irritate me because we warned our players about the crossing qualities of (Gregory) van der Wiel.

"We paid a lot of attention to the playing style of PSG, and we knew that the game on the flanks would be important.

"On the right we were good, with Mbemba and Gillet, but not on the left (the side of N'Sakala and Suarez) - that cost us two goals."