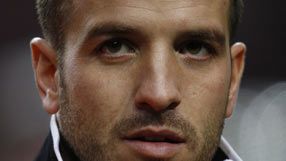 Despite insisting he is happy with life under Harry Redknapp, Van der Vaart admits he has an eye on returning to the German club one day, where he shot to stardom during three productive years between 2005 and 2008.

The 27-year-old joined Spurs from Real Madrid for £8 million on transfer deadline day, after reportedly seeing a return to the Bundesliga with Bayern Munich collapse at the 11th-hour.

While Van der Vaart has no regrets about moving to England, he dreams of a return to the Imtech Arena, despite lighting up the Premier League with eight goals in 13 games so far this season.

"My decision to move here [to Tottenham] was the best thing to do," Van der Vaart told Kicker-Sportmagazin.

"I do not regret moving over here. We are doing well in the league and Spurs are a top side in the Premier League.

"It is, however, a fact that I want to play for Hamburg again. I have been told that I will always be welcome back there.

"I think I will rejoin the club in the future. Last summer I was not handed the opportunity because the financial circumstances were not right at that point, but maybe in the future they will be."

Chelsea were thought to be heading the queue for Van der Vaart after his move from Ajax to Hamburg in 2005, but Real Madrid won the race to take him to the Santiago Bernabeu in 2008 for £10.8 million.

But that move never worked out for the playmaker, who endured a torrid two seasons in the Spanish capital where he was unable to find the form and rhythm that made him a star in Germany.