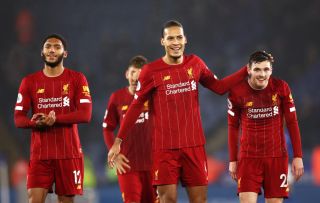 Sunday’s 2-0 victory over Manchester United, which extended the Reds’ lead at the top of the Premier League to 16 points with a match in hand, was the seventh successive clean sheet in all competitions.

Van Dijk and Gomez featured in six of those matches, the pair missing the FA Cup win over Everton, and since Gomez came into the team as a regular starter on December 14 their record is eight clean sheets in nine games.

However, the Holland captain said praise had to be shared around.

“Everyone is involved in that. We have a fantastic goalkeeper, the full-backs doing their job, our midfielders and stars obviously up front so it is a whole collective thing,” said Van Dijk.

“But obviously as a defender we are very pleased to keep clean sheets because we all know that with us if we keep a clean sheet there is a big chance to win the game so it is a good feeling.”

Liverpool have lost just one of their last 61 league matches and need just 10 more victories to lift a first title in 30 years.

But for Van Dijk and his team-mates it is just business as usual.

“We can’t deny that we are in a good situation but we don’t get carried away,” he added.

“It will never be easy, we all know that, but I think the good thing is we know it is never going to be easy so you can adapt to deal with certain situations.

“Also the mentality we have we know there are going to be setbacks in games, we know there will be difficult moments in games, but if you are ready to face them it makes it a little bit easier.”

The next challenge to Liverpool’s invincibility comes at Wolves on Thursday.

“They give everyone a big test. Massive respect for them, how they play and how they are doing it at the moment,” said the Dutchman.

“Good team, fantastic manager. It is always going to be tough. They showed it against everyone already in the league. We have to be ready again.”