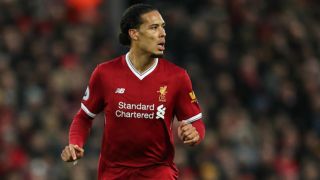 Liverpool centre-back Virgil van Dijk said he is unfazed by his critics, with the world's most expensive defender confident he can handle the pressure associated with his £75million price-tag.

Van Dijk swapped Southampton for Liverpool in a record-breaking deal at the beginning of January and the Netherlands international has experienced a mixed start to life at Anfield.

After scoring the winner against Merseyside rivals Everton in the FA Cup on debut, Van Dijk conceded a contentious stoppage-time penalty as Liverpool were held to a 2-2 draw by Tottenham in the Premier League on Sunday.

Under the spotlight after his big-money move, Van Dijk insisted he can cope with the scrutiny, saying: "I know because I made such a big step, for a lot of money, everything is going to be analysed.

"No one is going to look at the good things you do. Everybody is going to watch the bad things and that is how it is.

"It is a strength of mine to not really bother too much when people have their opinions, especially negative opinions. I know when I am doing it well and exactly when I am doing it wrong. No one will talk about my performance [against Spurs] in general. We defended very well, had two penalties against us with a lot of question marks around them, but no one is going to talk about that. But I know that as a team we did very well against one of the best strikers in Europe [Harry Kane]."

Van Dijk was left on the bench for Liverpool's 3-0 win at Huddersfield Town on January 30, with manager Jurgen Klopp warning that the club will not see the best of the 26-year-old until next season as he adapts to the Reds' style of defending.

"I have been out for eight months – last January until September really – and I didn't play at Premier League level. It is not easy to come back and especially when I have made such a big step as now with all the eyes on me and they look at every small detail. I am just focusing on the team and myself," the Dutchman added.

"The football we play, the pressing, the different options with players, it is totally different. So you need time to get used to everything but I am working on it every day together with the team. I am talking with the manager and everyone who can help me out."