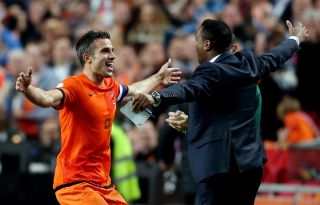 Van Persie's treble moved him onto 41 goals for his country – beating Patrick Kluivert's previous record of 40.

Van Gaal's side may have secured their qualification for Brazil 2014 last month, but that did not stop them turning in a devastating performance that their beleaguered opponents simply could not deal with, as Kevin Strootman and Jeremain Lens added first-half goals to the two scored by Van Persie, with a Szilard Devecseri own goal coming after the Manchester United striker had sealed his hat-trick – and the record.

Arjen Robben and Rafael van der Vaart added late free-kicks to complete the rout, but it was Van Persie who came in for specific praise from his coach.

"This (breaking the record) is a great achievement," Van Gaal told SBS6. "But ultimately it is all about the way the team puts him in contention.

"This is a difficult process to squeeze after losing possession. It's the first time we were able to keep going.

"The whole team put in a performance, we took a big step tonight."