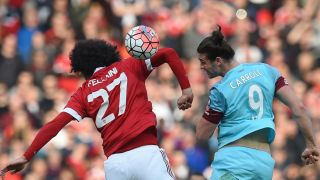 The Belgian international has been hit and miss at Old Trafford since he was signed by David Moyes in 2013, but his standing with the fans has seemingly hit a new low, despite Van Gaal's defence of the player.

Fellaini's performance during the midweek Europa League clash with Liverpool at Anfield, in which United lost 2-0, drew strong criticism from United supporters only for Van Gaal to claim he was the team's best player.

He was picked again for the 1-1 draw at home in the FA Cup fifth round against West Ham, but was withdrawn after 76 minutes amid boos and sarcastic cheers from the United fans.

But Van Gaal was once again unconvinced by the supporter's verdict.

"He performed well in our game-plan so that [the crowd reaction] was disappointing but it was the only moment that I was disappointed.

"The fans were supporting our side in spite of two losses this week. Maybe they have another opinion to me."