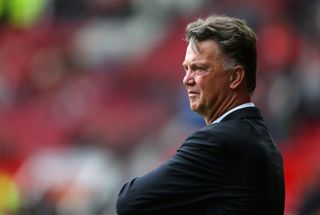 Despite initial optimism surrounding his appointment in May - following a woeful campaign under David Moyes - United were brought back down to earth with a 2-1 defeat to Swansea City on Saturday.

Argentina international Marcos Rojo became the club's third signing of the transfer window on Wednesday, but the club have come in for criticism due to a lack of stellar arrivals.

Arturo Vidal, Cesc Fabregas and Thomas Muller have all been reported targets, although Van Gaal has only able to add to Rojo, Ander Herrera and Luke Shaw to his squad.

However, the former Netherlands coach insists implementing a culture of team ethic and work rate remain his primary focus.

"If I want to create a winning team, I have to make sure each individual is trained in the perfect way," The Mirror quotes Van Gaal as saying.

"That leads to disaster. What happens when that one player gets injured? It would mean the team will collapse, as they can’t do without him."

Van Gaal saw Nani leave Old Trafford for Sporting Lisbon on loan as part of the Rojo deal, with the Dutchman open to further departures ahead of the closing of the window on September 1.

"As a manager, I have found that I am dealing with players who are not able to perform at the level I expect and players who don't want to perform how I want," he added.

"Both categories of players will be shown the door."