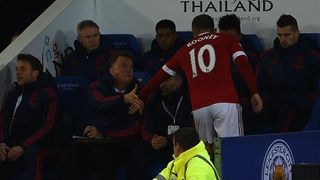 Jamie Vardy broke Ruud van Nistelrooy's record by scoring for an 11th consecutive Premier League match when he crowned a rapid Leicester counter-attack by slotting beyond David de Gea in the 24th minute.

The England man's historic exploits would not result in three points and a place at the top of the table for Leicester, though, as Bastian Schweinsteiger's equaliser left them behind Manchester City on goal difference with United a point further back in third.

United racked up almost 69 per cent possession by the end of a second half of few chances and Van Gaal was frustrated the visitors' control of play was not decisive.

He told BBC Sport:  "I am disappointed. I have the feeling we could have won his match.

"We dominated 90 minutes, but we gave the goal away, because we know already that Leicester is a counter team and also with our corner kicks they are very dangerous. We showed images of this also.

"We cannot give that goal away. Of course we are happy that we could score before half-time and in the second half we dominated more than in the first, but we didn't."

Wayne Rooney turned in a lacklustre display before making way for Memphis Depay midway through the second half, but Van Gaal revealed that a knock suffered by his captain was the main reason for the substitution.

"Wayne Rooney was limping and that is why I changed him," the Dutchman added. "I already wanted to change one of the strikers because they were not always running in behind.

"There were some times when if we were quick we had space to do that, but we didn't so that is why I wanted to bring Memphis in. Maybe I would have changed [Anthony] Martial [if Rooney was not injured]."

Even though he was unhappy with his side's defending on the goal, Van Gaal reserved rich praise for Rooney's England team-mate Vardy.

"Amazing and fantastic," he said. "The goal he scored is also amazing because it is not so easy. I can say our organisation is bad, but he is provoking that also.

"It is a fantastic record to have, 11 matches in a row. Not many players will do that."