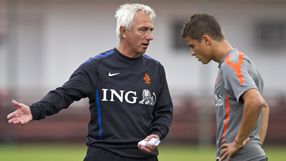 Van Marwijk, whose side have already reached the championship, announced his 23-man squad of Friday for the last qualifiers against Moldova and Sweden on October 7 and 11 with Wesley Sneijder and John Heitinga missing alongside Afellay.

Sneijder has a groin problem and Heitinga a knee injury.

"I spoke with Ibrahim [Afellay] several times already as he needs support after sustaining an injury like this just after he recovered from another tough injury," Van Marwijk told reporters of the Barcelona winger.

"He is very important for my squad."

Netherlands need one win out of the next two qualifiers to consolidate second place in the world rankings, which will guarantee them a position as top seeds at the draw for Euro 2012.

Arjen Robben and Stijn Schaars return to the squad with the former set to make his first appearance of the qualifying campaign.

For Schaars, his transfer from AZ Alkmaar to Sporting in the close-season was an important factor in him earning a spot in the Dutch squad.

"Schaars is really improving and it is obvious that he needed a new stimulus and needed to be playing at a higher level," Van Marwijk said about the midfielder, who has won 15 caps.