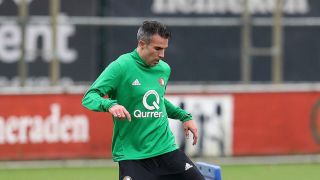 Returning to Feyenoord 14 years after departing was "a choice for continuity" for Netherlands international Robin van Persie.

Van Persie has re-joined the defending Eredivisie champions, having initially departed De Kuip in 2004 and taken in spells at Arsenal, Manchester United and Fenerbahce.

The 34-year-old, Netherlands' all-time leading goalscorer, made the move back to Feyenoord after agreeing a termination to his Fenerbahce contract – a decision fuelled by a desire to give his children a settled home.

"It feels fantastic to be back at Feyenoord after a 14-year journey abroad," Van Persie said in an interview with the club's official website.

"The fact I am back now is down to several things. Our two children, for example, also had a say.

"It was enriching for them to live abroad in recent years, but especially when children are in their teens, it is important they have a permanent place to live and go to school.

"The choice for Feyenoord is therefore also a choice for continuity, because we want to stay here in the coming years. That makes it a perfect match for everyone."

Van Persie made just two appearances in the Super Lig this season, having sustained a knee injury while on international duty in August.

The striker hopes to soon be ready to return to action for Feyenoord, who sit fifth in the Eredivisie after a 2-0 defeat to Ajax in Der Klassieker on Sunday.

"In the start of the season I played at Fenerbahce, but then that match came with Netherlands against France and I got an injury. As a result, I have been out of it longer than expected – unfortunately it was three months," said Van Persie.

"I have been working by myself for two weeks. I have trained hard, but individual training is not the same as training at a high level with the team.

"That's why I am happy to go on the pitch with the team now, so I hope to become match fit again soon."