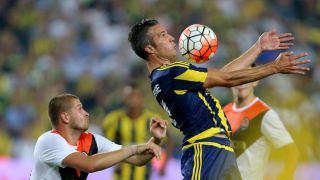 Fenerbahce's Robin van Persie made his Turkish Super Lig debut from the bench as last season's runners-up began the new campaign with a routine 2-0 win over Eskisehirspor.

The Netherlands international joined Vitor Pereira's side to much fanfare for a reported €5.5million fee from Manchester United in July and appeared as a 62nd-minute substitute as Fener coasted to victory.

Van Persie played his first game for the club in the UEFA Champions League qualifying tie with Shakhtar Donetsk, when he also came off the bench.

Moussa Sow and Fernandao, a new recruit from Bursaspor, were the ones handed starts in attack for Fener and they justified their respective selections with goals right before the break.

Sow got the first, nodding in a left-wing cross to give Fener the lead in the first minute of stoppage time.

And Brazilian Fernandao doubled their lead three minutes later, smashing an emphatic finish in from the edge of the area after breaking free of the defence.

Van Persie, who fell out of favour at Old Trafford, replaced Fernandao with just under half an hour to go, but he was unable to mark his maiden Super Lig outing with a first goal for the club.