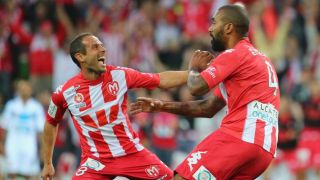 Goals from Orlando Engelaar and Mate Dugandzic put the Heart in a winning position after just fifteen minutes and when Victory defender Nick Ansell was sent off just before half-time, the game was theirs to lose.

Van 't Schip's side made no mistake, putting gloss on the score line thanks to strikes from David Williams and Harry Kewell and while the Dutchman was pleased with his sides performance, he conceded they still have some way to go to achieve their ultimate goal of reaching the finals.

"Of course the score line is good but we all know that we can still improve a lot and I think that's what we have to do on the pitch this week," van 't Schip said.

"We have to work hard for it and try to get better and better. It's not that I'm looking at a team where I'm leaning back on my chair.

"I know everyone is talking about finals and in our heads it's there because you have to always have a goal, and I think the first goal was to close the gap.

"We've closed the gap with the teams above us but there is still a lot of work to do if we want to be there in the finals."

The result sees the Heart extend their winning streak to five games, a far cry from their early season form which saw them go winless in their first 14 games.

Confidence is high in the Heart camp, and van't Schip says this can only bode well as the team continues to push for what would be an incredible qualification for the finals.

"Fortunately we have turend that around, it's done with a lot of hard work. Now you see the confidence of the boys is really big and the chances we get are going in, although I think we could’ve made a few more this evening.

"We create a lot of opportunities and that of course has all to do with the confidence that's in the team."

The derby also saw captain Harry Kewell return to action after recovering from a toe injury which had sidelined him for two weeks.

His late cameo was marked by a superb goal which added the final gloss to the Heart's performance and while van 't Schip admits it is great to have the Socceroo back, he insists it won't be easy for him to force his way back into the starting line-up for next week's vital clash with Newcastle.

"At the moment the competition (for places) is on," van 't Schip said.

"We have a week before the game against Newcastle, we have to see how players come back in training, who is fit, who is mentally ready, and Harry is fit again so he is in competition to be one of the players selected.

"But we are also thinking about what has happened the last few games as well so there are a lot of things to think about.

"It's a very big problem for me, not for the players of course. I have to have a headache about that but I have to make a decision about that, then the headache will be gone."