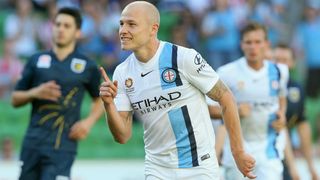 John van't Schip said keeping hold of Melbourne City star and Socceroo Aaron Mooy in January was a coup not just for his team but the A-League.

The fourth-placed A-League club saw four first-team players leave with four new stars replacing them in January, but hanging onto Mooy amidst strong interest from Chinese Super League and European clubs was perhaps their best piece of business.

"Aaron is showing week in, week out how important he is," City coach Van't Schip said.

"He's becoming a natural leader on the pitch. Off the pitch Aaron is Aaron, enjoying his football and he's setting a good example.

"He had a little dip of maybe two or three games when he was injured, but before and after that he has been very important and we're happy to have him.

"It's a good thing for the league as well."

Van't Schip said he was never worried about losing Mooy, whose 10 goals and 17 assists this season have been crucial to City's finals charge.

"We made it very clear when we signed him last year as a marquee, we wanted him for at least a whole season or even more," he said.

"He's an important figure for the team to achieve what we want which is winning something.

"Again, every moment has a time to reflect on and that moment was not around Christmas because we were already very clear from the start that he wouldn't leave."

But Van't Schip said the A-League could face tougher times in holding onto their best Australian players, particularly from China.

"If it's hard to keep [some of the best players] in Europe, you can imagine how hard it will be here," the Dutchman said.

"Good players, no matter who they are or where they play, in minor leagues will struggle because first of all the clubs need money and secondly the players want to leave and they want to play in better leagues or leagues where they get unbelievable amounts of money.

"The most important thing is that you can produce another Aaron Mooy or another young player that can grow."

And Van't Schip - who was the club's foundation coach when they were known as Melbourne Heart - is confident, no matter what the future holds for Mooy, his club is better resourced to do that since the City Football Group takeover.

"We have people that are looking out there for us for what we are asking for and they have clear vision and the opportunity to learn, so it makes it easier for us," he said.

"That is of course different to the old situation where a lot of the time we had to use our own resources and travel on our own and go to watch a lot of players by ourselves.

"Now we get [involved] in the later phase and we get the players we ask for and we can have a look … and it's more choosing who fits the best character, age and the way of playing.

"It makes it a lot more comfortable and easier to work with."