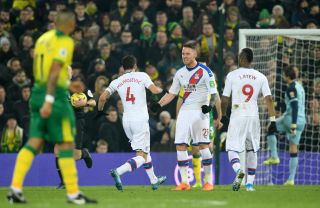 Norwich were denied two precious points in their survival bid as a VAR-awarded goal from substitute Connor Wickham earned Crystal Palace a 1-1 draw at Carrow Road.

The Canaries looked to be heading towards their first home win in eight games courtesy of Todd Cantwell’s early goal, but the Eagles had the final say four minutes from the end when Wickham converted a Wilfried Zaha cross from close range.

The goal was initially ruled out for offside, but was correctly allowed a stand after a check, with the draw a fair result after a full-bloodied game that saw both sides give decent accounts of themselves.

The Canaries took just four minutes to get their noses in front as they took the momentum from their spirited display against Tottenham last time out into their first game of 2020.

Emi Buendia’s burst into the box ended with his shot being blocked, but the ball fell kindly for an unmarked Cantwell, who coolly slotted home his sixth goal of the season from close range.

There was a muted celebration, with the youngster looking as though he could have been offside, but a VAR check quickly confirmed that Martin Kelly had been playing him on.

Teemu Pukki was then brought down by James Tompkins when clean through, but any thoughts of a possible red card were ruled out by an offside call.

It had been an excellent start from Daniel Farke’s bottom-of-the-table side, but Palace gradually worked their way into the game and Jordan Ayew directed a header straight at Tim Krul before a slip from Christoph Zimmermann let in Jairo Riedewald, who chose to pass rather that shoot, with James McArthur’s effort blocked.

Norwich finished the half the stronger, however, and as injury time approached Cantwell directed a shot from Max Aarons’ cross straight at Vicente Guaita before Aarons curled one just wide himself.

It took an excellent fingertip save from Guaita to keep out Buendia’s 30-yard free-kick nine minutes into the second half, while at the other end other disciplined defending was keeping the Eagles at arm’s length.

As the game passed the hour mark Mario Vrancic got on the end of Kenny McLean’s glancing header from a corner but was unable to guide it home from a tight angle.

Palace were struggling to make any headway in their search for an equaliser, with Zaha volleying wastefully over after a quick free-kick had caught Norwich out.

Norwich were desperately unlucky after 73 minutes when McLean’s rising close-range volley smacked against the crossbar, with the loose ball ricocheting to safety.

And Palace made the most of the escape as they equalised four minutes from time with a little help from VAR.

When Wickham slid home Zaha’s cross from inside the six-yard box the assistant referee’s flag immediately went up for offside, but replays show he was being played on by Zimmermann’s foot and the goal stood.