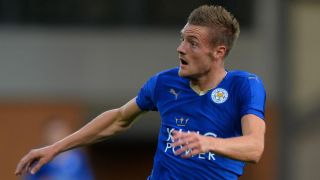 Leicester City have "substantially fined" striker Jamie Vardy after he was alleged to have aimed a racial slur at another man.

A video obtained by The Sun on Sunday shows the 28-year-old repeatedly abusing a fellow punter in a casino in the early hours of July 26.

England international Vardy subsequently apologised for what he called "a regrettable error in judgement".

Claudio Ranieri revealed on Thursday that Vardy would not be fined and Leicester later released a statement confirming the striker's punishment.

"Leicester City Football Club has concluded its investigation into claims made against Jamie Vardy in the national media last weekend," it read.

"Having established a full account of the incident in question and taken into consideration Jamie's prompt apology, the club has issued the player with a substantial fine and prescribed a programme of diversity awareness training.

"Jamie has been reminded of his responsibilities to the club, his profession and the Leicester community. The fine will be donated to local charities.

"The club will make no further comment on the matter, which it now deems to be closed."