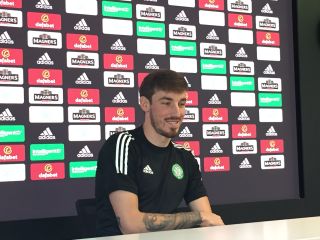 Vasilis Barkas insists he feels no pressure after becoming Celtic’s most expensive goalkeeper with his transfer from AEK Athens.

The 26-year-old, who has been capped 10 times by Greece, joined the Scottish champions on a four-year deal with the fee widely reported to be between £4.5million and £5million, with the potential for add-ons.

However, Barkas, who could go straight into Neil Lennon’s side for the Premiership opener at home to Hamilton on Sunday, is relaxed about his price tag.

He said: “I don’t feel pressure about this. It is normal for prices to go up and up.

“I am an international player, so I think it is normal. I don’t feel pressure, I think I can play for Celtic.”

Barkas has already played at Celtic Park when AEK took on the Hoops in the third qualifying round of the Champions League in 2018.

Lennon had been looking for a goalkeeper following the return of Fraser Forster to Southampton, after a loan spell at Parkhead, and the departure of Craig Gordon to Hearts.

Barkas is aware of the significance of this season as the Hoops look to win a 10th successive title.

He said: “I know it is a very big club and I know of its history and when I played against Celtic I remember the atmosphere, something totally different from Greece.

“I have come here for the 10th in a row, I come to take the championship again and I can’t wait for it.

“I know how important this season is but it is not only 10 in a row, we are Celtic so we must win every challenge.

“The manager told me about the club and what he wants this year, what he expects from me so I am ready to show that I am ready to play for this club.

“I am very excited. I am coming to play games and I am waiting to make my debut.”

Meanwhile, Celtic welcomed the announcement by the Scottish government that supporters are set to be allowed back into football stadia from September 14.

Guidance published on Thursday indicates that sports stadia can re-open from September 14, with a limited number of fans allowed in, and following public health measures. There is also the possibility of test events before then.

Celtic chief executive Peter Lawwell told the club’s official website: “Celtic are delighted with this positive development and are very appreciative that the government has taken this important step.

“We would like to thank the Scottish government, the SFA/SPFL Joint Response Group and everyone at the club who have collaborated and worked so hard over these past few difficult months.

“It is our intention to get as many supporters as we can back into Celtic Park as soon as we can, within the guidance.

“However, the safety and security of our supporters is always our top priority, and we will communicate more on this as soon as possible.”