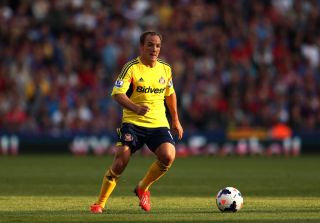 Poyet was confirmed as the new manager at the Stadium of Light on Tuesday, signing a two-year deal to replace Paolo Di Canio.

The former Brighton boss takes over a side rooted to the bottom of the Premier League table having taken just one point from their first seven games.

But Wales international Vaughan believes Poyet can make his mark and help the club start climbing the table.

"It's a good appointment. Hopefully he can get us off the bottom of the league and improve on performances from the start of the season," the former Blackpool man said.

"I don't know a great deal about Gus but I’ve spoken to a few players who have played with or worked under him and they have had good things to say.

"It’s not been a good start, we've been in the games and in the last two games we have been unlucky.

"The belief is there and we just need to get a couple of good results then you will see a different side."

Vaughan was linked with a move away from Sunderland in the close-season, but the 30-year-old hopes play a big part under Poyet.

"I’ve not played in too many games so hopefully I can get in the team and get a good run of games, and hopefully we can win some games too," he added.

"Under Paolo we did some good things, but it’s down to the players to improve on the results on the pitch."