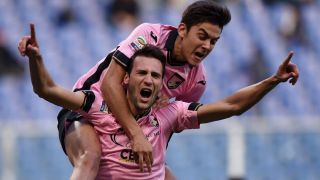 Franco Vazquez would love to reunite with former Palermo team-mate Paulo Dybala, now at Juventus, but is unsure where his future lies.

The pair forged a strong partnership as Palermo earned promotion from Serie B in 2013-14 before scoring 23 goals between them to help ensure the Sicilian side remained in the top flight the following season.

Argentina-born forward Vazquez's form was awarded with an Italy cap by Antonio Conte in March last year, while Dybala earned a move to Juve and subsequently represented the South American nation for the first time in October, ruling out the possibility of the pair playing together on the international stage.

However, the 26-year-old Vazquez still wishes to feature in the same side as the diminutive Dybala once more, though he remains focused on seeing out the season with Palermo, who are six points above the bottom three in 14th.

"Paulo is young and has an incredible amount of skill which is why he has impressed. I'm not surprised and I'm happy for him," Vazquez told La Gazzetta dello Sport.

"In the meantime, my goal is to save Palermo, then I would like to once again play alongside Paulo. We did some great things here in Palermo – starting in Serie B.

"First the goal is to achieve safety, and then we'll see after that. I have a great relationship with the president [Maurizio Zamparini] and I will always thank him because he's always had faith in me.

"I don't know what will happen in June. I can't decide whether I go to Juve, AC Milan or Inter or another club.

"Zamparini's focus is on the good of the club and I must try to achieve the goal we set out."