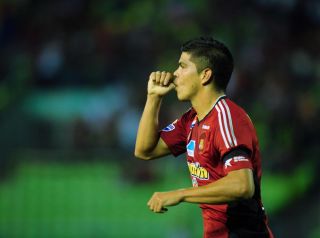 In the rescheduled round-six clash, forward Farias scored twice late in a four-goal first half for hosts Caracas at the Estadio Olimpico de la UCV.

The win extended Caracas' unbeaten streak to five games since losing their Apertura season-opener to Estudiantes de Merida in August.

Caracas, who have three games in hand, are fifth in the standings and seven points adrift of league leaders Deportivo Tachira.

It only took Caracas seven minutes to hit the front against the visitors via Omar Perdomo.

Romulo Otero doubled Caracas' advantage in the 34th minute before Farias got in on the action three minutes later.

Armando Araque offered Zulia a glimmer of hope on the stroke of half-time but Farias restored Caracas' three-goal lead in added time.

Zulia pulled a goal back through Johan Arrieche past the hour-mark but it proved nothing more than a consolation.