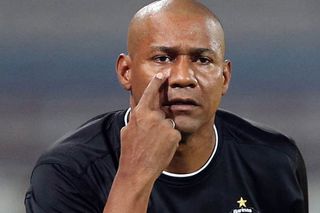 Ricardo Clarke starred with two goals as Zamora easily accounted for Trujillanos 5-2 at the Estadio Rafael Agustin Tovar, which was enough to send the hosts two points clear at the summit.

Noel Sanvicente's men made a dream start to proceedings after Juan Falcon opened the scoring in the 11th minute before Clarke double the home side's advantage six minutes later.

Mayker Gonzalez pulled a goal back for Trujillanos but Zamora restored their two-goal buffer within seven minutes courtesy of Clarke's second.

Freddys Arrieta struck before the interval to offer some to Pedro Vera's team but second-half goals from Pedro Ramirez and John Murillo ensured a memorable night for the home faithful.

Mineros de Guayana missed the chance to jump ahead of Trujillanos in second position after playing out a goalless draw at Deportivo Anzoategui on Sunday.

Mineros claimed a comprehensive 4-2 win against Zamora last week and were heavy favourites to build on that strong showing.

But Richard Paez's outfit could not break through at the Estadio Jose Antonio Anzoategui.

Mineros are one point adrift of Trujillanos but one ahead of Tucanes, who shared the spoils with Aragua after a scoreless stalemate.

Deportivo Lara surrendered a three-goal lead as they drew 3-3 at home to Zulia, who have not won away from home since January.

Atilio Alvez was the hero as Estudiantes de Merida climbed off the foot of the table with a hard-fought 1-0 victory over fellow strugglers Atletico El Vigia.

Yaracuyanos and Carabobo drew 1-1, while Atletico Venezuela failed to make any significant inroads in their scoreless draw at home to Deportivo La Guaira.