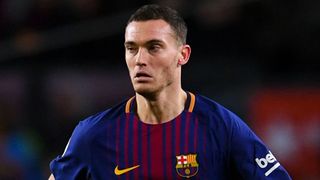 Barcelona defender Thomas Vermaelen has been ruled out for two weeks with a left hamstring injury sustained during Sunday's 5-0 win at Real Betis.

The centre-back pulled up in discomfort in the 38th minute at the Benito Villamarin after chasing down Sergio Leon near the halfway line.

Vermaelen was replaced by Samuel Umtiti, who came on for his first La Liga appearance since December 2 after recovering from a hamstring problem of his own.

Barca later tweeted to say Vermaelen would undergo further tests on Monday to determine the severity of the problem.

And the club have now confirmed the results of those checks indicate the Belgium international will be out of action for a fortnight.

The former Arsenal defender, who has struggled with repeated injury problems in recent seasons, has been involved in all of Barca's last 13 matches after working his way back to full fitness.

He spent last season on loan at Roma but managed only nine Serie A appearances.