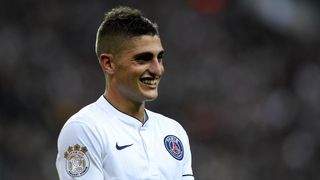 The Italy international has developed into a key figure at the Ligue 1 champions since joining them from Pescara in July 2012 and his performances in the French capital have not gone unnoticed elsewhere.

Verratti has been linked with clubs such as Real Madrid and Barcelona and Xavi feels he would fit right in at the Camp Nou side.

"Verratti is an extraordinary player," Xavi was quoted as saying by Le Parisien.

"He plays at a level similar to the midfielders currently at Barcelona. He is enjoying a fantastic season at PSG and is playing at a very high level.

"There are not many midfielders out there in the game who are better than him. I think he is one of the best players in the world at the moment.

"He reminds of myself a bit. He likes to have the ball, play short passes, long balls and decisive balls. It is very hard to win the ball off him. He is a player of the highest level."