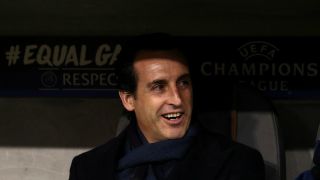 A shock reverse at Strasbourg in Ligue 1 was followed by a 3-1 loss to Bayern Munich in the Champions League - PSG's first defeats of the campaign.

Though PSG still beat Bayern to top spot in their group, and led Ligue 1 by nine points coming into the weekend, reports had suggested that Emery could be replaced by his countryman, former Barcelona boss Luis Enrique, with the club's hierarchy  not enamoured with last-season's secession of the league title to Monaco and European collapse against Barcelona.

But Italy international Verratti has thrown his weight behind Emery's cause and believes added continuity could help PSG in their quest for greatness.

"His situation, we do not talk about it between us. He does a very great job," Verrati told L'Equipe.

"When he arrived, it was a bit difficult for everyone because great players were gone.

"It is not easy for him to come into this context, but I think we have improved a lot.

"He is a great coach and we trust him. If you want to create something important, you have to keep at it."

Javier Pastore and Angel Di Maria scored either side of half-time on Saturday, with Kylian Mbappe calming fears of a last-gasp defeat brought on by Anwar El Ghazi's strike four minutes from time.

Both Argentines have struggled to hold down regular spots in Emery's side this term, but he refuted suggestions that the goals would convince the club not to sell the pair in January, insisting they are not for sale regardless.

"The information that I have from them, they do not tell me that they want to leave," Emery told reporters.

"They are how they are in the team. With Hatem [Ben Arfa] and Lucas [Moura] we talked about the possibility of leaving, not with others."