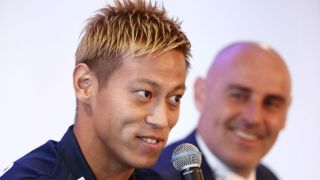 Keisuke Honda claims the offer to play for Melbourne Victory encouraged him to postpone retirement, and the Japanese star insists he will not be distracted by his additional duties with the Cambodia national team.

Honda was last week announced as Victory's marquee signing ahead of the new A-League season, the former CSKA Moscow and AC Milan player following in the footsteps of countryman Shinji Ono, who starred for Western Sydney Wanderers from 2012 to 2014, in moving to Australia.

Having retired from international football after the World Cup, the attacking midfielder credited Victory coach Kevin Muscat with convincing him to play on in Melbourne.

"I'm so glad that I can try a new challenge in my career," he told a news conference at AAMI Park.

"I'm 32 years old, I was thinking to quit my career after the World Cup, but luckily this club offered me the great offer that changed my mind … so I appreciate it.

"To be honest, I changed my mind after I spoke to Kevin ... He said to me he really wants to succeed as a club for not only the fans, for the A-League. So he's an ambitious person, I'm an ambitious person as well. I am inspired by him. I think that's a big, big meeting for me."

In the days after Honda's signing was confirmed, it emerged he had also agreed to take on a management role with the Football Federation of Cambodia, prompting questions to be asked about the sincerity of his commitment to Victory.

Responding to queries about how he will juggle both roles, Honda said: "It was about four months ago, I spoke to the Cambodian association. I asked them, 'may I become a manager of national team at the same time I'm a soccer player?' and they said 'yes'.

"I feel pressure, because I have a lot of responsibilities. I have to play well here, so now I need to train well after this press conference.

"First, I am a player of Melbourne Victory right now, from today. So I have to focus for playing well, for the fans, for the team-mates, and for everyone here.

"I can't wait, I look forward to playing as soon as possible. I also am doing a lot of things besides soccer, but that's not a big issue, and I have a lot of my colleagues in Japan and the US and everywhere and they are helping my activities and that's why I can focus on playing soccer."