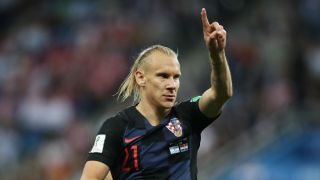 Domagoj Vida and Croatia have set their sights on winning the World Cup as they prepare to face hosts Russia in Sochi on Saturday.

Semi-finalists at France 98, Croatia are on track to at least match that feat ahead of their quarter-final showdown with Russia at Fisht Stadium.

Boasting the likes of Luka Modric, Ivan Rakitic and Ivan Perisic, Croatia are seen as dark horses to hoist the trophy aloft in Moscow on July 15.

And confidence is high within the squad after edging Denmark, according to experienced defender Vida.

"It wasn't our best game. It brought a lot of pressure, especially after loss to Portugal at Euro 2016. We wanted this win a lot. It wasn't easy," the 29-year-old told reporters.

"Now the pressure is off a bit. We would like to of course beat Russia and, God willing, go all the way to the end. We are close. Our plan is not to stop now."

Croatia goalkeeper Danijel Subasic was the hero against Denmark as the Balkan nation prevailed 3-2 in a shoot-out following a 1-1 draw.

Subasic – who broke down in tears after being asked about his t-shirt dedicated to Hrvoje Custic following the midfielder's tragic death in 2008 – kept out three penalties in a stunning display after extra time.

"We're thankful for what he [Subasic] did [against Denmark]," Vida said. "But it's a team sport and every game brings a different hero.

"The important thing was that we beat Denmark. Our goals are higher. God willing we would like to lift the World Cup trophy. That's what we're here for."

Croatia endured a difficult World Cup qualifying campaign, having parted with Ante Cacic following a 1-1 draw against Finland in October.

Asked about Croatia's turnaround as they eye a final-four berth, Vida added: "We were in a bad situation at the end of qualifying but we knew of our quality and players in our team.

"With each win our confidence is growing. We believe we can go all the way here in Russia. The support back home is giving us additional energy."