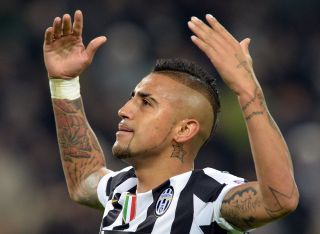 Vidal scored twice in the first half at the Juventus Stadium as Antonio Conte's men made it 12 league wins in a row.

Sampdoria were the last side to win at Juve in Serie A last January, but further goals from Fernando Llorente and Paul Pogba ended any hopes of a repeat scenario.

Despite suffering a nervy period in the second half when Manolo Gabbiadini made it 3-2, Vidal feels his team-mates showed they were worth the win as Juve continue to set the pace at the top of Serie A.

"This is a difficult league. Roma and Napoli have great players, but we must continue like this to the end in order to earn a third consecutive Scudetto," he told Sky Sport Italia.

"Sampdoria came here to play their football and I think they are a really good side who can go far this season."

Vidal is Serie A's highest-scoring midfielder and registered his ninth and 10th league goal of the season as Juve maintained their 100 per cent record at home.

However, the Chile international is unconcerned by his personal goal tally so long as Juve keep their title charge on track.

"I haven't set any specific target for my goals. I just want to carry on like this to the end. I don't have any bonus tied to the goals in my contract, I just do it for the team.

"Last time I gave the penalty to Mirko Vucinic, but this time it was for me and thankfully I scored a goal."