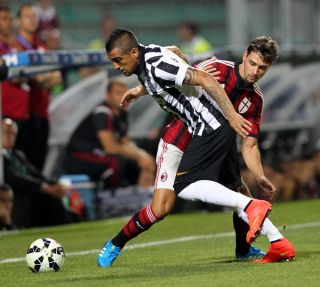 Milan were 1-0 winners over Juve and beat Sassuolo 2-0 at the Citta del Tricolore on Saturday to clinch the trophy for the fourth time.

The return of Chile midfielder Vidal was most pleasing for Juve coach Massimiliano Allegri, whose side face Chievo in their league opener on August 30.

Vidal, who has been linked to Manchester United in the close-season, had been battling a knee injury.

"It's important to see Arturo back in the team," Allegri said.

"Even though he's not yet match fit, he played a good half-hour's football tonight."

Milan, who won the pre-season trophy for the first time in six years, beat Juve thanks to Keisuke Honda's 29th-minute goal.

Roberto Pereyra gave Juve a 1-0 win over Sassuolo, who were beaten by Milan after a Jeremy Menez penalty and Stephan El Shaarawy goal.

Allegri believes his team, aiming for a fourth straight league title, are heading in the right direction.

"There are many aspects to improve but we're on the right track," he said.