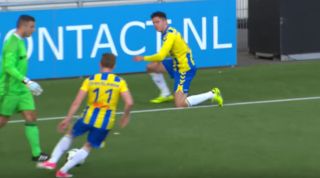 With Almere leading RKC Waalwijk 1-0 in their Eerste Divisie fixture at the Mandemakers Stadion on Monday, Kramer spent way too long staring at Rob van Sonsbeek, who was lying on the floor after the goalkeeper had made a crucial save down at his feet.

The referee ruled out a penalty as Kramer had got the ball, but the snoozing glovesman seemed unaware that play was still continuing.

As he continued to fix his eyes on Van Sonsbeek, RKC striker Pieter Langedijk swooped in to tackle him and tap the ball into an empty net with only six minutes remaining.

The game finished 1-1, leaving Almere outside the play-offs on goal difference only after their two dropped points. Oh dear.