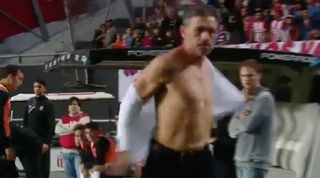 The former Gunners full-back, who played for the north London club from 1998 to 2001, was sent to the stands in a Primera Division match against the league leaders in only the 27th minute on Saturday night.

Vivas, who regularly showed signs of a temper in an eventful playing career focused on in an in-depth interview with FourFourTwo recently, was so unhappy with the referee's decision that he left the sidelines in a fit of rage.

The 47-year-old Argentine tore off his white shirt, hoofed a ball that was in his way and stormed off down the tunnel.

This isn't the first time Vivas has lost his cool as manager – he lost his job at Quilmes after punching a fan after his first game.

"I started reading about meditation, Buddhism, and found the serenity I needed to take the next step," he told FourFourTwo. "I’m very different now, more serene.”

Er, about that Nelson...