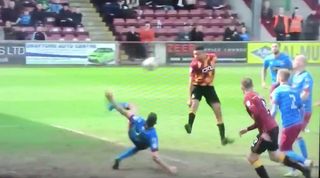 Scunthorpe won 3-2 to move up to fourth in League One and improve their chances of featuring in the the play-offs.

However, the game could have easily finished a point apiece had Wallace not come up with a stunning block.

With the game in injury time, Wallace – who was lying on the ground – managed to leap up and nudge away a goalbound effort from James Meredith before landing back on the mud patch.

A Scunthorpe defender has just made the greatest block ever. pic.twitter.com/LPEnH3SHA2