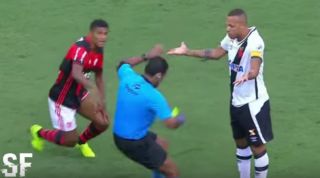 In a Brazilian Serie A contest between Flamengo and Vasco da Gama on Sunday night, former Sevilla striker Luis Fabiano got involved in a bizarre incident with the referee.

Vasco took the lead thanks to a goal from Yago Pikachu (we know, right?), shortly before the referee booked Fabiano.

With the 36-year-old feeling hard done by, he approached the referee and invaded his personal space.

But before you knew it, the middle man was doing his best Paul Alcock impression and recoiling in horror, having barely been nudged by the ex-Brazil international.

Once the referee regained his composure, he then sent Fabiano off. We can only assume he booked himself shortly afterwards.